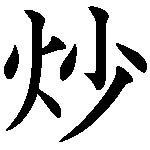 The cooking method we associate most with Chinese cooking is the stirfry, or chao 炒.

A proper stirfry is not a saute, although that's what you may get in bad restaurants. No, a great chao 炒 is created in a really hot, well-seasoned wok, with skill that almost brings the pan to life. The texture, the aroma, the flavor are all enhanced in an almost magical way. The Cantonese call it "wok hei", which means the "spirit of the pot". In Mandarin, hei translates to qi (or "chi" as yoga enthusiasts will often call it) which is the word for "source of energy" and "breath" as well as spirit.

Restaurant menus don't use chao 炒 in the name of all stirfry dishes. You'll see it now and then, especially Cantonese menus. The most common things you'll see with the character chao is with fried rice or chao fan, as below.

You'll also sometimes see it with a character will get to next time - mian 麵. (Just don't confuse chao mian 炒麵 with "chow mein".)

How to recognize. On the left we have the radical for fire 火 - our little dancing guy that we saw in BBQ or shao - on the right is the character for "a few". (The top is little, the bottom is just a slash radical.) The idea is that the heat of the fire is very quickly applied. I also think that the right side kinda looks like the motion of stirring some thing up. Swish swash!

Fan - For Fans of Cooked Rice 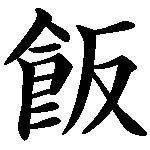 There are two characters for rice. Mi 米 is the general word for rice as a grain or plant. It's also the radical in a lot of characters, as well as a modifier. We'll learn more about this when we learn about vegetables and other grains.

Fan 飯, however, means "cooked rice" and it's a really common Chinese menu word. You'll see it sometimes on Chinese-only menus, listing a kind of meat, and then Fan, indicating it's sliced meat served over white rice. Like this:

Which is...? You just saw the meat here in the previous post: Cha Shao 叉燒, or Fork roast. So...? That dish would be BBQ pork over rice.

Now, BBQ pork is something that many restaurants don't do for themselves. They buy it cooked by roasting specialists, who also do another famous roast meat. Or actually poultry. Look at the menu item below. The first character is Shao 燒 again, so it's a roast or BBQ. The middle character has the bird radical. It's Ya 鴨, which we saw a while ago.

Remember? The left side looks a little like the head an neck of a bird, looking straight at you, shouting "Aflac!" A DUCK! This is BBQ duck with rice!

How to recognize: The left side is the radical for eat, food or dish, which you will learn more about later. The right side doesn't help you much. It's the character for inside out, upside down or against, which makes no sense unless you realize that the word for these is "fan". It's a sound-like. The symbol basically means "the kind of fan you eat". Which doesn't make it easy to recognize until you realize that it's everywhere and it's a very common word.

Cha - Stick a BBQ Fork In It 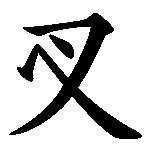 Cha Shao 叉燒 may be more familiar to you as Char Siu, the famous bbq pork filling for Char Sui Bao 叉燒包, those lovely white steamed buns. What Cha Shao 叉燒 actually means is "Fork Roast". (You remember Shao 燒, don't you?) The Chinese assume you know they're talking about pork, the same way they assume you know they mean pork when they mention meat.

This tasty staple of Chinese cooking is made by marinating sheets of pork and hanging it on a fork in a very hot oven. It's a variation on spit roasting, and if you think about it, the character for "fork" looks kind of like the stand for a spit you put over a fire. (And since the Chinese don't use forks as tableware, that's the most suitable symbol for it.)

Cha Shao 叉燒 gets used in a lot more dishes than just bao 包. You'll see it on just about every menu on things like BBQ Pork Fried Rice (Cha Shao Chao Fan 叉燒炒飯) and many other dishes. We'll move into rice territory next time, when we make way for a tasty duckling.

The Pinyin spelling is chā, or cha1 (first tone).
Posted by Maude Cat at 7:58 PM No comments: 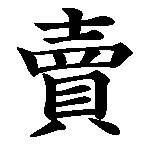 I mentioned that Jiao 餃, which means dumpling, looks like a little guy standing next to a vendor cart, selling something. Jiao zi 餃子 are one of the most popular kinds of dumplings, but there is another very popular dumpling called "cook sell", or Shao Mai 燒賣. Shao, as we explained recently, means roast or stew, although it's used in this case just as a generic "cook". The other character, the one pictured here, is Mai, and it means "sell."

These tasty little dumplings are common Chinese dim sum houses and Japanese restaurants. The Chinese make them of pork, or pork and shrimp, or beef, or even a vegetarian version of sticky rice. The filling is formed into a little ball, and the wrapper gathered around it, open-topped, so it looks like an overflowing bag of money. It's supposed to bring good fortune.

If you just see it listed as shao mai (or sui mai, or su mei) it will probably be filled with pork.

You'll see these in Japanese and Korean restaurants as shrimp shao mai.

And you have to guess what Niu Rou Shao Mai is (you've seen it, and we've reviewed it recently):

How to recognize -- Mai 賣, or sell, looks very squared off and fortified, almost like a bank, which may make you think of both "sell" and of moneybags. It also looks a little like a stack of steamers, and that's usually how they are brought to the table in a dim sum restaurant, in a stack of steamers. Take your pick.

(Next time, we finally get to the real roasting of Shao.)

The Pinyin spelling is mài, or mai4 (forth tone).
Posted by Maude Cat at 7:56 PM No comments: 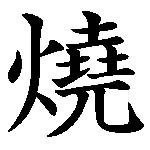 The character you just learned, hong 紅, or red, shows up a lot with one other character. That is shao 燒, which means to roast or burn, or in this case it means stew. Red Cook or Hong Shao 紅燒, is a wonderful method for meats or root vegetables, where you braise in soy sauce, five-spice and often wine. Some cuisines might add a little sugar too. It is usually translated on the English menu as "soy sauce chicken" or "soy sauce pork". It is a popular way to treat fat-back and side pork, since you render out a lot of the fat, and replace it with other yummy flavors.

Shao 燒, however, mostly means roasting and barbecue, and we will learn about that real soon.

How to recognize: On the left is the radical, which is fire, and it looks like a dancing man. We're going to get real familiar with that radical. Here the dancing guy is standing next to a structure of racks, like an upright charcoal barbecue. He's a barbecue guy! He's standing there roasting and basting that meat.

Right now, though, he's not roasting. He's simmering up some chicken in red-cooking sauce. Here's what his sign for Red Cooked Chicken would say:

The Pinyin spelling is shāo or shao1 (first tone).
Posted by Maude Cat at 11:52 AM No comments:

Hong You - The Red and The Oil 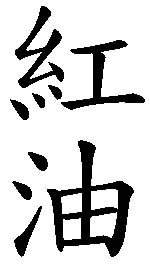 Red oil, or chili oil, or hot pepper oil, is a common condiment. It's generally sesame oil that has had hot peppers soaked in it until the oil becomes spicy. Because oil tends to cling to your mouth, red oil can give you a spicier experience than the peppers themselves.

The best way to clear your mouth of hot oil is not a cold drink, but rather a mouthful of plain rice. You need something to absorb the oil off your skin. A cold drink will make the oil congeal a little.

How to remember it? I haven't got a memory aide for this one. The left side means thread (we saw a squished version in the Chicken character), and the right means work. While we'll see lots of threads in future, that I-beam on the right is not so common so I mainly remember that. (I think there is one other word that is commonly used in restaurants, but I can't remember it right now.)

I mainly remember it by context. So, if you see that I-beam next to oil, you probably have red oil. Here is a variation on one of my favorite Sichuan appetizers. You know the second two characters from just a couple of days ago:

The Pinyin spelling is hóng or hong2 (second tone).
Posted by Maude Cat at 6:02 PM No comments:

You - a saucy oil 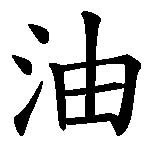 You means oil or sauce. See the three dots of the water radical on the left. When you see this, it doesn't usually mean fried, although in a few cases it does. (Oil Stick 油條 is the name for the crullers you can order with your congee, for instance.) You'll see it most often in reference to various flavors of oils and sauces (like soy sauce or jiang you 醬油).

I mentioned earlier that the water radical has two variations (neither of which look much like the main character). Here is an example of you in a different font, with the other version of the water radical.

How to recognize You: it looks like a bottle, with the water radical hanging off the left side. (You know how oil has a way of dripping down the side of the bottle, right?)

The Pinyin spelling is yóu or you2 (second tone)
Posted by Maude Cat at 8:42 PM No comments:

For new readers you may want to read through some of the earlier articles from January 2009. Either click in the archives, or just use the "older posts" button at the bottom of the posts column.

(And yes, I'm still working on a preliminary set of flashcards!)

Maude Cat
Maude Cat is a mackerel tabby of most excellent markings and nature. She likes to be fed, just like you.

Some of the links lead to Amazon.com. If you follow them and buy something, I will get a small share of the proceeds. Every penny of that will go into my Summer of Writing Fund, which will allow me to take some time off in the summer and concentrate on writing.

If you wish to support me in this effort, and don't particularly want to buy anything from Amazon, you can make a direct donation too. If you like.